According to the World’s Health Organization’s report on the Global Tobacco Epidemic (2011,) a third of the global adult population smokes, which results in five million smoking-related deaths per year worldwide. It is estimated that by the year 2030, this number will increase to eight million deaths annually. What is more, the addiction affects not only smokers, but also those around them, as more than 600.000 people die each year from second-hand smoking. Even so, smoke-free laws, such as prohibiting smoking in all indoor areas, protect only 16% of the world’s population.

Bearing in mind the health and well-being of people around the world, our community at Neuromarketing Science & Business Association (NMSBA) has decided to address this matter by initiating the Neuro Against Smoking (NAS) Project - a cross-country study dedicated to health issues. The goal was to check what the true impact is and effectiveness of anti-tobacco warnings presented on cigarette packs across the globe and to show that neuro measures can enrich research findings. We wanted to bring new, valuable insights to the existing discussion on cigarette warnings. Reaction Time, one of many tools used by NMSBA members, allows to explore consumers’ impulsive and automatic attitudes – something that can be crucial to fully understand how warning messages are working.

This pro-bono study has been directed at promoting healthy lifestyle, supporting the tobacco-free environment, thus aiding societies and governments in their fight against smoking. Initially we estimated that it would be a small project with four to six participating countries, yet the response to the initiative exceeded our wildest expectations. Finally, to our knowledge, this has been the world’s biggest international neuro study regarding health issues to date, with 24 participating and seven supporting countries being represented by companies and universities. The project has not only exemplified how neuromarketing techniques can be used for greater good, but has also highlighted the potential resulting from joint cooperation. It has been inspiring to see that so many people creating our community have had the world’s well-being at heart and have been willing to contribute their time and resources in order to pursue it.

All neuro experts who represented the participating countries had access to the data obtained during the course of the study. This gave them an opportunity to gain valuable insight regarding e.g. differences between countries, cultural aspects affecting the perception of the packages, hypothetical explanations of why given warning messages worked or didn’t work well or what needed to improve in order for them to be more effective in the future.

When designing the research, we paid close attention to the WHO’s recommendations stating that (1) warnings should cover minimum 30% of the package, (2) they can consist either of text only or text + picture, and (3) they can present various content - oriented on smokers or smokers and people around them. Being aware that all of the countries participating in the study followed different regulations concerning cigarette packages, we wanted to see what effect would it have if they were following the minimal requirements of the World Health Organization. We are planning to address country differences in next studies.

We selected four different warning messages for testing presented on the figure below. Two of them were text only based warnings (left side on Fig.1) and the other two were picture-based (right side on Fig. 1). In each group, one of the warnings conveyed a message directed at the harm the smoker does to himself (upper row on Fig 1), and one directed at the harm he causes to others (bottom row on Fig. 1). 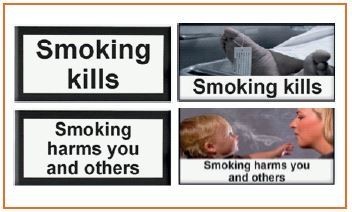 Fig. 1. Warnings messages used in the Neuro Against Smoking (NAS) Project; According to WHO recommendations

Pictures showing harm done to others are more effective

The study proves that pictorial messages are more effective than text only based warnings. Even if textual warnings were evaluated equally high in declarations as pictorial warnings, on an emotional level warnings containing pictures were more convincing, as revealed by Reaction Time measure. Moreover, it seems that warning messages emphasizing harm done to other people are more effective than messages emphasizing harm done to smokers’ health. Additionally, both of the findings seem to be strong and culturally independent as similar findings were discovered in most of the participating countries.

These findings not only support actions initiated by the WHO – e.g. introducing pictorial warnings - but also suggest that pictorial messages should be carefully selected to maximize their effectiveness.

The added value of neuro tools

Neuro Against Smoking study also shows that the data gathered solely thanks to explicit declarative methods provide clear insights only in 50% of cases. By clear insights we mean the scores that allow making a decision and selecting the more effective warning message. If we only relied on declarative responses, we would be able to select more effective warning messages in 50% of cases. Nevertheless, applying Reaction Time enriches this score significantly: over 25% additional insights can be derived thanks to combining explicit and implicit methods, therefore we could identify more effective solutions even if on declarative levels all options tested reach similar scores. It proves that the application of combined explicit and implicit measures can be beneficial to find the most effective solution and identify drivers that have real impact on smokers’ behavior

We hope that Neuro Against Smoking (NAS) project is not only the first study regarding health issues conducted on such scale and a wonderful example of joint cooperation, but that it will also be a stepping stone for similar studies in the future, where the potential of neuro methods can be used for a greater good.

The NAS Study Was Performed by: