A Bias for Action

In today’s hyper-digitalized world, brands can reach and interact with consumers in more ways than ever. But when it comes to driving action, are all channels created equal? To find out, we partnered with Canada Post to examine the effectiveness of physical (direct mail) and digital (e-mail and display) advertising media by way of their impacts on the consumer’s brain. We focused on two key indicators of media effectiveness: ease of understanding and persuasiveness, to answer the question: has direct mail become ‘obsolete’ with modern-day technology?

Our aim was to elucidate consumer attitudes towards five types of direct mail: postcard, envelope, 3-dimensional mailer, 3-D mailer with sound, 3-D mailer with scent, and four types of digital media: e-mail on laptop, e-mail on smartphone, display ad on laptop, display ad on smartphone. To do this, we utilized electroencephalography (EEG) and eye-tracking techniques, paired with pre and post-exposure surveys of the promotional materials. This approach allowed us to combine consumer self-report measures with measures of the brain’s electrical activity, creating a composite measure of consumer attitudes towards common modes of advertising media.

The study consisted of 270 participants. After completing a pre-exposure survey, participants were fitted with an EEG cap and eye-tracking glasses to record activity while they interacted with various forms of physical and digital media. We quantified three major variables: cognitive load, motivation and visual attention to gauge how a person felt about each mode of advertising. Cognitive load represented how easily a message could be understood, derived from EEG activity in the area of the prefrontal cortex. Motivation or a general measure of decision-making was identified by asymmetric activity in similar prefrontal regions. For our measure of visual attention, we turned to the eye-tracking data which indicated a participant’s scan path and how long they spent looking at any given area of the ad.

As predicted, we found that direct mail is easier to understand and more memorable than digital media. It required 21% less cognitive eff ort to process and elicited higher brand recall (75% vs. 44%) as evidenced by the ‘cognitive load’ score and post-exposure memory tests.

Similarly, direct mail proved more persuasive than digital mail, as shown by the ‘motivation’ score. Direct mail’s motivation score was 20% higher than digital’s score (6.77 vs. 5.52) – even more so when the advertisement appealed to additional senses beyond touch (i.e. sound, scent).

In addition, direct mail was found to be visually processed more quickly than digital media. We examined the total time in milliseconds spent viewing the advertisement, as well as the average time spent on areas of interest (price, product, logo). The time spent on areas of interest for direct mail was less than digital media (4.8% of total time vs 7.2%) but the retention was higher, suggesting more information was digested in less time. 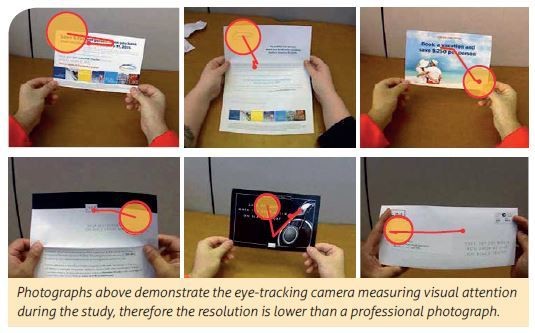 Direct, physical mail outperformed digital media on all three of our content evaluative variables: cognitive load, motivation and visual attention. By being processed in less time, having low cognitive load and high motivation scores, direct mail proved to be a more effective tool in driving consumer behavior than digital media. Direct mail taps into intrinsic neurological processes that trigger action. It also offers the creative versatility to amplify action by appealing to senses beyond touch. It is better suited than digital media to close the marketing-sales loop, or the gap between interaction and action.

This study launched and fueled the new Canada Post imperative, SmartMail Marketing. We have elevated their business and created new channels of growth. This study is an example of how neuro can transform an entire organization.