Sustaining viewer attention during television advertising has become increasingly challenging as viewers have more distractions. Fox Sports was planning to launch an all-sports network and wanted to create a “win-win” differentiator – providing benefit to both viewers and advertisers. The double box (or picture-in-picture) advertising format was designed as a creative way to capture viewer attention and enhance advertising effectiveness, while simultaneously providing viewers with a more positive viewing experience in this fragmented environment.

FOX Sports teamed up with Innerscope Research to study the effectiveness of Double Box format advertising in NASCAR, in order to go beyond traditional measures. The scope was later widened to understand the effectiveness of Double Box ads in other important sporting environments including College Football, Soccer, UFC and Major League Baseball. FOX aired Double Box pods for the first time in primetime during the 2013 AT&T Cotton Bowl and launched FOX Sports 1, an all-sports network that featured Double Box ads.

A three-phase study was undertaken with 568 subjects over two years to understand relative levels of emotional engagement with full-screen ads and ad pods vs. Double Box during live sporting events, visual attention to branding moments and any additional best practices or insights that can be leveraged for this new format.

For the Double Box studies, each participant was biometrically monitored throughout the testing experience using a Biometric Monitoring System™, which includes a lightweight chest belt that quickly and easily slips on underneath regular clothing. Each belt collects and transmits four channels of neurophysiologic data wirelessly to computers in the testing facility that run specially designed software collecting data throughout. The data are then aggregated and analyzed to identify overall levels of emotional response and attention to each target advertisement. The four biometric channels include: Heart Rate, Skin Conductance, Respiration and Motion. 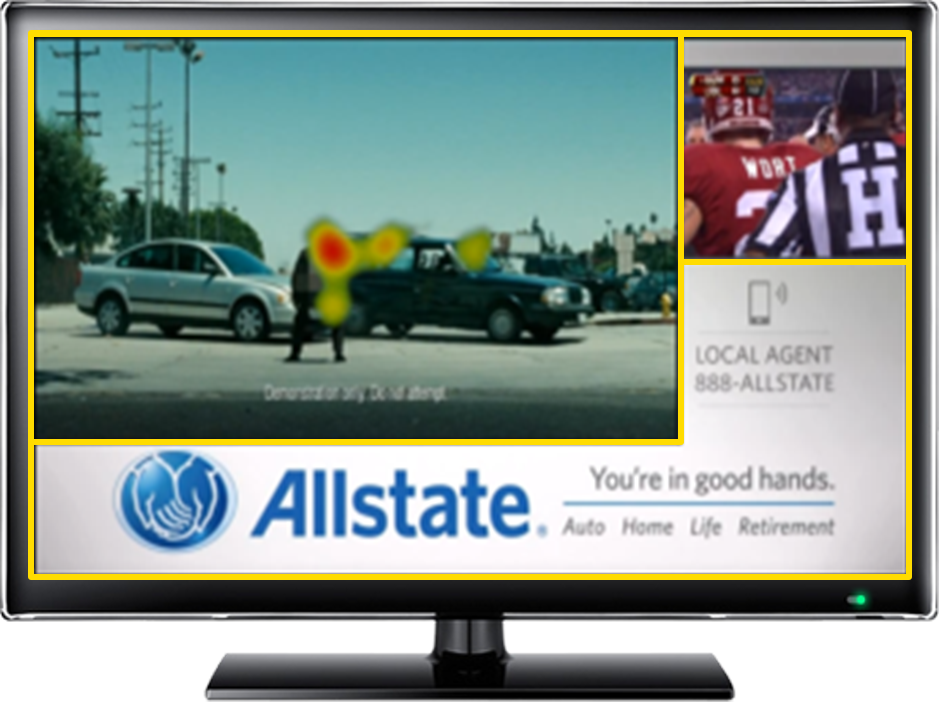 The integrated results show that the Double Box format adds value relative to the traditional fullscreen ad break. This research gave proof of concept for Double Box advertising and created the basis for a clear strategic differentiation for launching Fox Sports against competitive sports networks.

There were three main findings. Firstly, attention to advertising in Double Box is surprisingly high; the vast majority of visual attention during advertising is on the sponsored elements (ad and wrap). Viewers only look at the non-advertising content around three times, for approximately one second at a time, during a typical Double Box ad experience. Eye-tracking shows that both groups follow the story of the ad equally. Despite the fact that viewers state they focus on the event content, viewers primarily pay attention to the ad.

Results led to a variety of focused and actionable recommendations and best practices to show the added value of the new format to both viewers and advertisers. FOX Sports launched FS1 with 15% to 20% of advertising revenue from Double Box. So what are the implications for marketers? Viewer choice ultimately results in increased engagement and increased brand impact with the ads presented in Double Box. It brings value to advertisers by improving overall pod engagement (middle ads) and extending the life of the ad over time. It provides an opportunity to glance at a second window during low points in an ad, helping ads feel much more engaging, and therefore more valuable. Dynamic elements can increase the level of attention to Double Box ads. This offers a unique opportunity to balance branding, ad content and program content.

This research supported Double Box advertising and created the basis for a clear strategic differentiation for Fox Sports. The potential for increased acceptance of the Double Box format may change the future of televised sports and advertising in general. FOX’s commitment to a transparent and collaborative research approach enabled insights to be communicated to all parties with results informing hypotheses for each phase of the study and ultimately impacting live sporting events coverage. Peter Leimbach, Vice President, Sales Research, FOX Sports commented that this advertising research was invaluable in providing insights on the effectiveness of Double Box ads that would be difficult, if not impossible, to garner from typical survey research techniques. Without the biometric and eye-tracking components of the research, the company felt that they would have had little evidence of how viewers emotionally and physically engaged with the ads.

Nonetheless, despite compelling and unique research outcomes, some challenges remain for the Double Box format. Producing more content during the ad break means more work for everyone. The ad agencies have to create content for wraps and TV producers need to work through the ad breaks. In addition, striking the right balance is a challenge, as new content during the ad break needs to work synergistically with the advertising to be most impactful. Future research programs will continue to address and optimize these challenges. Meanwhile, the results were sufficiently convincing for FOX Television to have rolled out twelve Double Box ad units during a recent prime time episode of American Idol.