Each year in the US up to 8 million healthy but abandoned animals find themselves at shelters and rescue groups. Only about 30 percent of pets in homes come from shelters or rescues, and millions that aren’t adopted are euthanized. To address this problem, the Ad Council, with support from the Humane Society and Maddie’s Fund, undertook a public service advertising (PSA) campaign called the Shelter Pet Project, with an aim to significantly increase the rate of shelter pet adoptions. Although many prospective pet owners believe adoption is the right option, they lack confidence in shelters and the pets housed there. This campaign addressed those concerns.

The PSA campaign targets adults seeking a cat or dog, but who may be on the fence about adopting from a shelter or rescue group. The communication goal was to reduce the fear, uncertainty, and doubt around shelter pets. A campaign refresh, which took a risky new creative approach, was targeted for launch in early 2014. Prior to launch, innovative pro bono neuroscience research was undertaken by Nielsen in order to help optimize the copy and ensure that the new creative approach would effectively communicate to the target audience.

Given the overall goal of unraveling the fear and uncertainty around shelter pets, the main idea of the creative refresh was to show that pets from shelters can make great companions. The creative approach communicated “There’s a shelter pet who wants to meet you”. In different spots an individual dog or cat would walk on a blank stage without back drop or storyline, like an actor in a “screen test” auditioning for a role - in this case with an aim to convey the prospective pet’s personality and charm and hence suitability for adoption. Nielsen’s consumer neuroscience unit collaborated with the Ad Council’s campaign management and research teams to field a laboratory study that evaluated the implicit neurological responses of target viewers. A combination of eye-tracking and electroencephalogram (EEG) measurements made while viewers watched 0:30sec television commercials was used to determine the impact the ads had. The audience was adults interested in acquiring a cat or dog in the near future.

The neuromethods permitted second-by-second analysis of the degree to which individual scenes were emotionally engaging and memorable, as well as measurement of the degree to which the executions implicitly primed key communication points. An initial round of testing was conducted on rough-cut executions, where the results provided key insights critical for identifying highlights of the ads with respect to their ability to emotionally engage the target audience, as well as weaknesses in their ability to communicate key messages and branding elements. The findings yielded actionable recommendations aimed at sharpening the impact of the creative and increasing memorability of key message points. Following refinement of the executions, the second round of neurological testing was conducted to confirm that high emotional engagement was maintained while memorability for key messages and branding elements was improved. 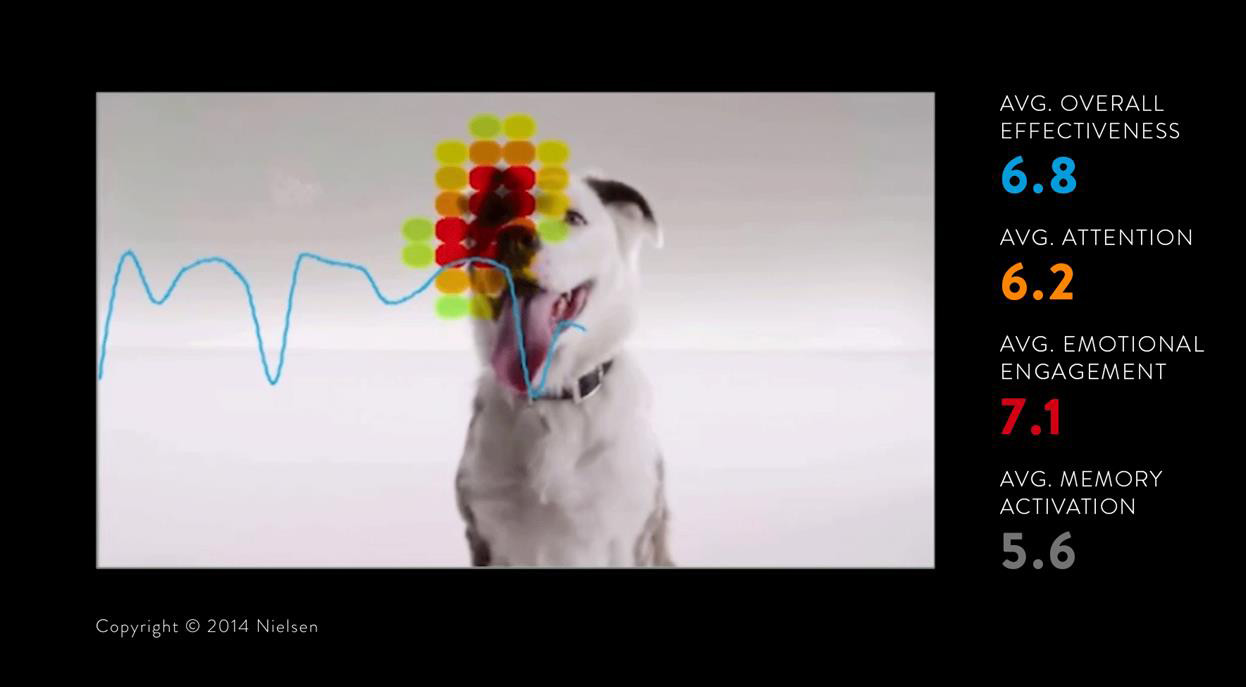 Neurological testing indicated that while the pets could highly emotionally engage viewers by their compelling onscreen presence, and while the approach succeeded in implicitly communicating that the animals were friendly and loveable, viewers were failing to also fully encode the call to action and branding elements. In particular, it was observed that the pets could be too successful at stealing the scene, detracting attention and undermining encoding of key elements such as the Shelter Pet project URL. Based on the neurological insights, tactical re-editing to draw greater attention to the key messaging components succeeded in improving their memorability, while permitting the emotional connection with the viewer to be maintained. Followup neurotesting confirmed the effectiveness of these edits.

The creatively refreshed Shelter Pet Projects campaign was relaunched in early 2014. In the first three months after the February 2014 launch, there was a 133% increase in traffic to ShelterPetsProject.org, and a 28% increase in searches directed to the PetFinder.com database linked to the site. Between the launch of the campaign in February and mid-December 2014, over 25% of visitors to the website were converted to key campaign goals such as searching for a pet in the online database, searching for a shelter or learning more about pet adoption and the campaign. There was also a 116% increase in Twitter mentions of #Shelterpets and a significant increase in “likes” month-over-month for the ShelterPetProject Facebook page. Most critically, since the Shelter Pets Adoption effort was first initiated, national trends indicate that adoption of dogs and cats from shelters has increased significantly, while the rate of euthanasia for abandoned pets has correspondingly dropped.

In this study, consumer neuroscience methods were used to help guide a bold new refresh on the advertising campaign for the Shelter Pet Project. Research insights helped to optimize the balance between high emotional engagement with the pets depicted in the creative, and effective communication of brand and key messages. Since the Shelter Pet Project was implemented there has been a significant increase in adoption from shelters and a corresponding decrease in euthanasia. The results indicate that neuroscience tools can be used with surgical precision to optimize advertising messages in ways that can significantly add to their market place effectiveness.

Creative teams often deride the crude, overall scorecard approach provided by traditional copy-testing methodologies. In contrast, neuroscience techniques can provide them with a specificity and scene level granularity that can support unique, actionable, science-based insights. Which in turn can help them to better realize the communication goals of advertisers without undermining the artistry and creative intent for the copy. Such results presage a new era of productive collaboration between researchers and those involved with creative development, ultimately one with the potential to also lead to more effective communications for advertisers.