Packaging colors on commercial goods capture attention and affect the interest level evoked in customers, and therefore consumers’ buying behavior (Gastón & Rosires, 2010). Lighting in stores and shops also greatly affects the color appearance of products, which is exactly what this research is about - to study such color appearance effects in terms of the attention they capture from customers, and EPR as the measure of attention.

Previous research has shown that EPR component N100 is related to initial attention and cognition (Hsin-Hui Chiu, 2008), while P300 has been recognized as a reflective component for new objects, innovation and discrimination (Polich, 2007). That explains why customers’ attention to the colors on different drinks packaging can be studied using N100 and P300 responses.

The hypothesis set for this study was “Different color combinations on drinks packaging generate different levels of attention and so different N100 and P300 amplitudes”. The color stimulations used in this experiment were divided into three categories based on the Munsell Color Wheel theory (Mahyar, Cheung, & Westland,2010; Ohta, 2008): complimentary (red/green), contrast (yellow/red) and analogous (yellowish green/green). These colors are the most popular main and supplementary colors of retail PET bottles on the market. All samples (PET bottles with one of the three stimulations) were placed in an environment of 6500K LED color temperature, 2000 Lux illumination and against a white background.

The subjects of this study were twelve right-handed, healthy students, with an average age of22 from a university in Taiwan. All of them had passed the red-green color vision defects testing prior to the experiment. The subjects’ recruitment and all acts of experimental implementation observed IRB regulations.

The procedures of the experiment were as follows: each stimulation appeared 30 times randomly on the monitor in the same stimulus (3000ms)-break (6000ms) sequence, making a total of 90 trials of 9000ms each. The brain responses of the subjects were acquired, preprocessed and analyzed by Neuroscan’s Physiological Data Record System and Visual Image Display System. Testing statistics were carried out by MANOVA.

The results of MANOVA and Bonferroni post-hoc test showed a descending N100 (90–150 ms) amplitude for complimentary (red/green), contrast (yellow/red) and analogous (yellowish green/green) colors, and a higher P300 amplitude for complimentary (red/green) than analogous (yellowish green/green) colors. The further the distance is between the two colors on the Munsell Color System (Fig. 1), the higher the attention amplitudes (N100, P300). Therefore, our hypothesis, “Different color combinations on drinks packaging generate different levels of attention and so different N100 and P300 amplitudes” is supported. 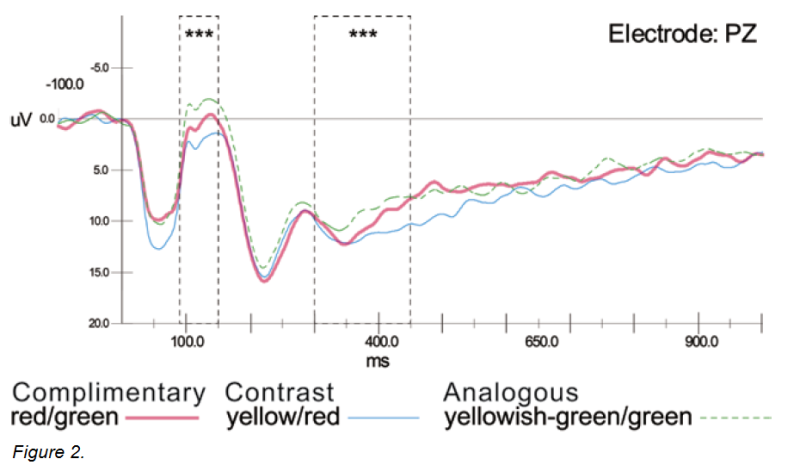 Complimentary colors (red/green) generate the highest attention EPR amplitude (N100, P300) on the parietal lobe, making these the best for designs that aim to capture the customer’s instant attention. Analogous colors (yellowish green/green), on the other hand, generate a lower attention EPR amplitude (N100, P300) but resulted in the highest desire to buy, implying that desire to buy has no direct correlation to attention. Understanding customers’ demand for branding and products is the key to discovering their actual buying behavior. However, it is also important to study the attention-prone ability of the design/product during the early stages. This study suggests that designers or those involved in marketing and design should always seek a balance between these two factors (understanding customers’ demand and attention-prone ability).