After four years the president elect of the Neuromarketing Science & Business Association, Professor Emeritus Richard Silberstein, decided to step down from the advisory board. At the end of the Neuromarketing World Forum in Dubai last week, he received an honorary membership for his efforts and dedication to the NMSBA. 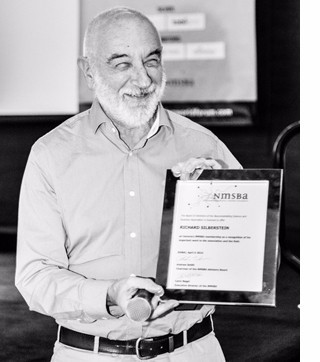 Richard Silberstein was involved in the preliminary advisory board and the two advisory boards after that. Carla Nagel (executive director of the NMSBA) spoke about his important contribution as a scientist, mentor and discussion leader.

We are grateful for his support and we hope to involve him in future events and other activities. In the name of the board an honorary membership was handed over during the closing ceremony of the Neuromarketing World Forum.

A big thank you from the whole team!

The new NMSBA president is Andrew Smith, Director of US Consumer Insights for The Hershey Company.