What is the effect of project concept on architecture preference? How does it impact the willingness to purchase? Neuro Tracking recently conducted two separate studies (at an interval of a month and a half) for two different real estate developers. They were interested in constructing mixed-use apartment buildings, in the two most expensive areas of the city, with a unique concept that no other project in the area had for the same market segment.

We were hired by both clients separately to do exactly the same three things:

1. Understand the insights that drive preference choice of the market segment (MS). To do this, we designed and performed a psychometric assessment (n=150) to evaluate brain dominance, fears, experiences and brands associated with their way of life.

2. Design the concept of the project. Using the insights revealed in the psychometric assessment, we designed and created two different videos that show the concept for each project as realistically as possible.

3. Validate the cognitive and positive emotional responses to the location of each project, building design (architecture typology), project concept and willingness to pay the maximum price for the preferred building design that is the most closely associated with the shown concept.

For both studies we used mobile eye-tracking and EEG to assess customers’ visual attention, emotional engagement and motivation after exposure to a three-minute video of a real state project concept and ten different building designs.

For each study we measured the same number of subjects (n=30, M50/F50) with the same socioeconomic level background (SEL= C+, B,A) in an age range between 28-45 years. The subjects needed to be single, divorced, single parents with a maximum of two children older than ten years, or married couples without children. In each study, a different project concept was shown, but the same building designs. We also correlated results with self-report feedback from respondents who had completed the EEG and eye-tracking study. 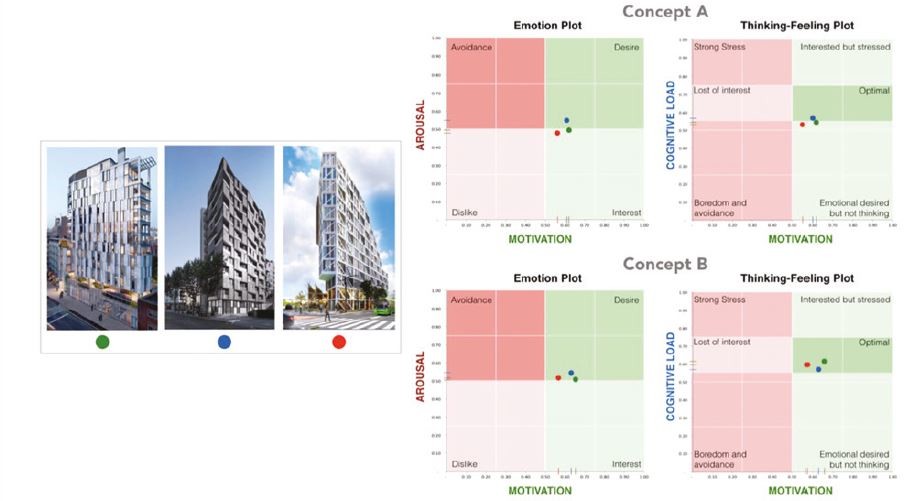 Even though the concepts evoked an extremely similar performance in cognitive and emotional responses and we concluded that any of the concepts were as good, we found out that concepts had a significant effect on architecture preference. We also found out that any concept was able to encourage the subjects to be willing to pay up to 10% more than the average price in the market for the real estate product offered. Interestingly, a careful step-wise debriefing interview after the study showed that subjects were willing to pay a higher price than average if the project they saw was going to be built in a way that was as similar as possible to the concept video shown.

One of the project developers (Concept B) had their opening day event and sold 50% of the entire project in one evening. At the end of the event, the sale price / M2 was 10% higher.