One of our clients approached us to carry out a scientific study to prove their health claim. They had developed a shampoo and a hair serum that they claimed had superior relaxing effects. EU regulation dictates that nutrition and health claims on products made in the European Union must be clear, accurate, and based on scientific evidence (Regulation (EC) No 1924/2006). Claims that could mislead consumers are prohibited. This not only protects consumers but also promotes innovation and ensures fair competition.

For the purpose of the study, we measured a variety of parameters. We undertook behavioral assessments and we measured physiological parameters (blood pressure, electrodermal activity (EDA), heart rate). Behaviorally, people in a relaxed state typically show decreased movement and a relaxed posture (stretched legs when seated, and sitting less upright). Blood pressure, EDA values and heart rate values decrease when you relax, and the variation in inter-beat intervals increases. The ideal approach when studying behavior is to measure it in a natural environment. In our case, that would mean at home, in the shower. Of course, that is not very practical. Not only because few subjects would be willing to be filmed in the shower, but also because we equipped the test participants with a wristband, which was not waterproof, to measure their physiology. We, therefore, carried out the tests in a hotel room and asked the participants to wash their arm instead of their hair with shampoo or apply the serum to the hair. After the washing session, the participants entered a smelling session in which they smelled the shampoo/serum in a bottle. Prior to, and after using the shampoo/serum, the participants sat in an easy chair where their overall behavior was filmed. The tests were conducted in two hotel rooms; in one room a control (neutral) shampoo/serum was used, while in the other room participants used the relaxing shampoo/serum. We alternated the control and test room between test days.

After applying the relaxing serum, the test participants had decreased heart rate values, blood pressure values remained constant. However, after smelling the serum in the bottle the (systolic) blood pressure significantly decreased. We did not find an effect on inter-beat interval variation, nor on EDA. The behavior data showed a decrease in the number of posture switches after applying the test serum. We found no effect on the time spent sitting upright or leaning back, nor on leg behavior. 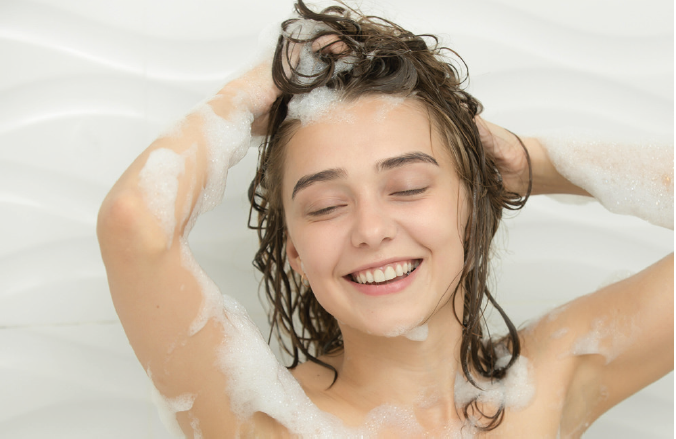 Although we tried to make the test environment as natural as possible, it was not an in-home setting and many participants mentioned this. In a real-life setting behavioral data would be leading, in our case, we are inclined to attribute most weight to physiology. Shampoo and serum showed different effects. This may be because both products differ in chemical composition and concentration of active ingredients. What may also have played a role is that the fragrance of the shampoo disappeared to a large extent as participants washed their arm while the serum remained in the hair.