Blocking the Blockers: An Empirical Study of Mobile Video Ad Placement and Delivery

In Asia, the deployment of invasive autoplay ads has led to the widespread adoption of mobile adblocking software. To avoid a similar outcome in the US, the Advertising Research Foundation (ARF) commissioned Merchant Mechanics to perform a foundational study of mobile video ad placement, and delivery strategy effectiveness. The ARF recruited six different corporate sponsors, namely Colgate, Clorox, Nissan, Kellogg, Levi Strauss & Co., and Unilever, to fund a test of mobile ad delivery formats using 15-second mobile video ads. Six different mobile ad formats were tested: Incentivized, Pre-roll and In-stream Autoplay, Pop-Up, Silent Autoplay with Click-to-Play Audio, and traditional Click-to-Play. User experience was quantified using both explicit and implicit measures, including EEG, Facial Affect, GSR, HRV, and Eye Gaze. Results showed clear winners and losers, with important implications for how best to advertise on mobile. Ad formats that maximize user control and incentive and minimize content interruption were found to be the most engaging and least likely to lead to the desire for mobile adblocking.

Merchant Mechanics commissioned the development of a website for mobile stimulus presentation capable of delivering each of the six different ad delivery formats. Participants (N=144, 72M, 72F) between the ages of 18-56 were recruited to come to the lab, and have their eye gaze, brain waves, and biometrics measured while they surfed on a mobile phone. Once participants were hooked-up to the EEG and calibrated on the eye-tracker, they navigated to the website on the smart phone to begin the study. They were exposed to six different editorial articles and six different ads presented in one of the six ad placement and delivery conditions (i.e., a between-subjects design). The presentation order of both the editorial pages and the ads were counter-balanced using a balanced latin-squares design. Mobile users’  reactions were monitored using a diverse array of biometric measures, including automated facial affect coding, EEG, eye-tracking, galvanic skin response (GSR) and heart rate (HR, HRV). Participants also completed selfreport pre- and post-task surveys assessing brand recall, purchase intent, emotional state change, and willingness to pay (WTP) for an ad blocker.

Disruptive ad formats are quickly closed. In-stream Pop-up, Autoplay and Silent Autoplay elicited a strong “annoyance” response and prompted users to quickly click on the ‘X’ to exit. Conversely, Pre-roll Incentivized and Pre-roll Autoplay were well received: participants watched these ads longer, and brand recall was also highest in these conditions (33% for Incentivized and 27% for Pre-roll Autoplay). Click-to-Play ads were watched longer when participants clicked on those ads.
Disruptive ad formats lead to a higher willingness to pay (WTP) for ad blocking software. Participants were most motivated to get ad blocking in the In-stream Pop-up, Autoplay, and Silent Autoplay conditions. This suggests that the disruption of content via In-stream (IS) advertising is what causes annoyance and ultimately installation of ad blocker software. Pre-roll (PR) ad units, which did not interrupt the user experience, showed a lower desire for adblocking. Note that the current industry standard, In-stream Silent Autoplay, is most likely already driving users towards mobile adblocking.

There was an unexpected finding: outside of the consumer’s conscious awareness, differences in ad placement and delivery impacted the perception of the content where the ad was embedded. Participants were much less likely to share or positively rate editorial content containing disruptive ad placement and delivery strategies. This has important implications for content providers: bad ad formats hurt social shares for good content.

Annoying and disruptive ad formats like Pop-up and In-stream Autoplay and even In-stream Silent Autoplay, 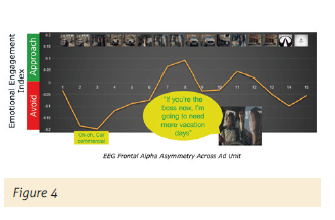 lead to negative visceral reactions in-the-moment that translate into enhanced interest in ad blocking later on. Ad formats such as Pre-roll Autoplay, Incentivized, and In-stream Click-to-Play, on the other hand, are less disruptive, more likely to preserve the overall user experience, and help give users a stronger sense of control over content consumption. In addition to looking at the eff ects of ad placement and delivery, it was also possible to collapse across the different experimental conditions to look at how participants reacted to the specifi c content of each ad. This allowed for a second-by-second analysis of EEG Frontal Alpha Asymmetry (Approach-Avoid) that revealed important insights about how each video ad was performing, and where it might be improved to enhance brand recall and overall viewer experience.