Even the savviest savers and most unbendable budgeters are not always aware of the factors inﬂuencing their spending habits. A British web-based price comparison business (MoneySuperMarket.com) specializing in ﬁnancial services commissioned research looking to reveal the science behind emotional spending triggers. Emotional spending can cause people to buy impulsively and spend money on unnecessary purchases, reducing the amount of money available for meaningful purchases and necessary savings.

In the hopes of encouraging a more mindful approach to spending, this study aimed to uncover how diﬀerent emotional states inﬂuence how people choose to spend their money. Numerous psychological studies have demonstrated that emotional states can have a motivational inﬂuence on behavior. For example, individuals experiencing a negative mood are motivated to engage in behaviors that may eliminate these feelings.1 Buying has become an easily accessible and socially acceptable behavior that many use to escape negative feelings and perpetuate positive ones.2 By looking at how our diﬀerent moods (such as sadness, stress and boredom) impact our spending habits, people can learn how to better manage their ﬁnances.

Mindlab conducted an online psychological study looking to reveal how diﬀerent emotional states inﬂuence spending behavior. We induced speciﬁc emotional states (happy, sad, bored and stressed) in the participants using an emotional priming task and subsequently put them through a series of online semi-implicit tests that assessed various aspects of their spending behavior. The advantage of carrying out this research online is the high scalability, which allowed us to test a large number of participants in a relatively short amount of time. Additionally, a signiﬁcant amount of shopping in the modern world is now done online, therefore, an online shopping study can provide us with information that is relevant in the real world.

A total of 500 participants took part in the study. Participants were divided into ﬁve diﬀerent “mood” groups – happy, sad, bored, stressed and a control group. The emotional priming task involved having each participant watch a two-minute video designed to induce a speciﬁc emotional state, i.e. sadness or boredom. Participants in the control group did not watch a video. Following emotional priming, the participants completed a series of online tests to investigate how diﬀerent emotional states aﬀected their spending choices. We looked at three diﬀerent measures; likelihood to buy, buying impulsivity and likelihood to overspend. We examined how these factors were aﬀected by diﬀerent moods. We compared our findings with a control group to obtain a measure of how much more/less likely participants were to make certain ﬁnancial decisions when in a happy, sad, stressed or bored mood. 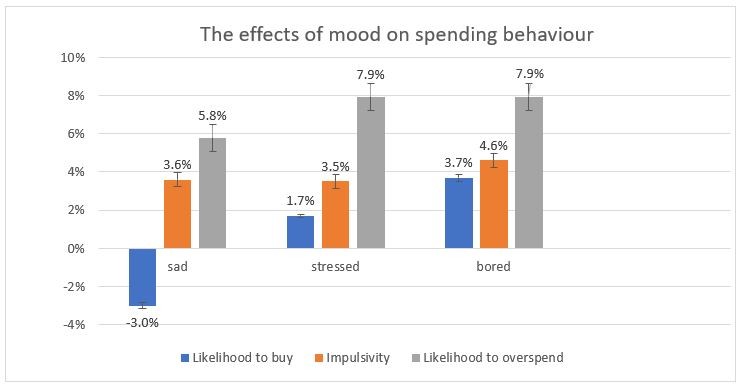 Figure 2: This graph depicts the percentage of people who chose to buy, were more/less impulsive and chose to overspend compared with a control group.

Our overall ﬁndings showed that sadness, stress and boredom caused signiﬁcant changes in spending behavior. Compared with the control group, people who were sad, stressed or bored were, on average, 7% more likely to overspend and 4% more impulsive when making purchase decisions. We found that boredom was a major driver of spending. People who were bored were 5% more likely to buy products. People were the least likely to buy when sad.

However, when they chose to buy, they were 4% more impulsive and 6% more likely to overspend. Notably, we found substantial emotionally-driven changes in spending habits when it came to beauty products. Women who were sad were over 40% more likely to overspend on beauty products (refer to ﬁgure 3). Furthermore, men who were sad displayed high impulsivity when choosing to buy beauty products. Mood also had signiﬁcant eﬀects on insurance purchases. Participants who were sad, stressed or bored were, on average, 15% more impulsive when it came to buying insurance compared with the control group. 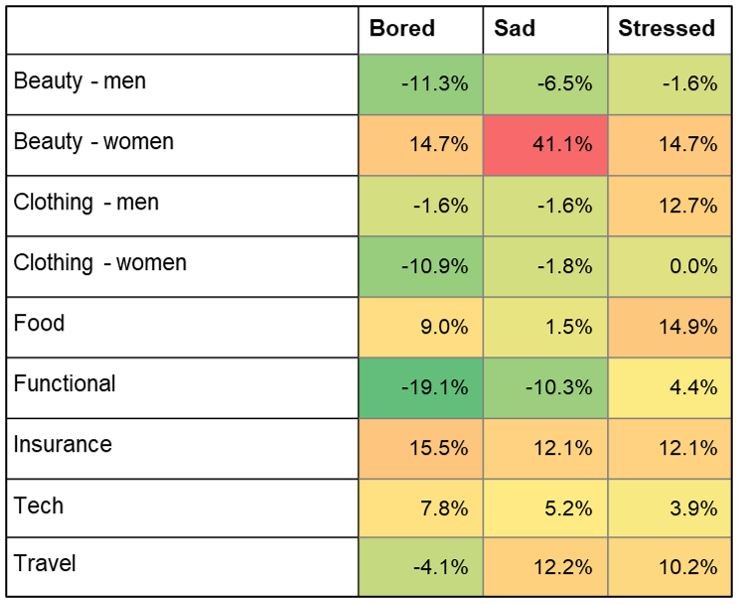 This research allowed us to help our client provide better ﬁnancial advice to their customers. The online experiment provided empirical evidence supporting the hypothesis that diﬀerent emotional states can cause people to make reckless and irresponsible spending choices. For example, the experience of being bored can drive people to seek stimulation and excitement which may increase impulsiveness and put people in more of a “buying mood”. Similarly, people who are sad or stressed may use shopping as a way to alleviate their negative mood. It is advisable that consumers remain wary of their moods when making ﬁnancial decisions.