Better Understand the Success of Discounters

When building your brand, you often have clear goals: communicate clear benefits, key values and get the personality of the brand across. What is it that makes you credible and stand out? Basic questions we all try to address before talking to our audience.

The aim of this study is to better understand the success of so-called discounters. In these stores, we typically see products in cardboard boxes, a limited number of products per category, narrow aisles and simple lighting. In the past years, retailers who have taken this more stripped-down, utilitarian approach have seen steady growth in their market share. This utilitarian approach is the opposite of what we would call a more hedonic approach. The more hedonic retailer creates a comfortable and rewarding shopping experience. With wider aisles, specific lighting per product category, more staff, and plenty of choice per category. In the present study we used functional MRI (fMRI) to answer two central questions:

1.  Does investing in a shopper experience lead to increased buying impulse? We tested this by measuring activity in regions of the brain associated with buying impulse and perception of value.
2.  Do utilitarian and hedonic shoppers differ in brain response to the different shopping environments? For instance, do utilitarian environments evoke specific responses in utilitarian shoppers?

For the study, Alpha.One invited 30 shoppers to take part in a brain-scanning session. These were carefully selected: 15 shoppers who describe themselves as a hedonic and 15 who typically shop at a utilitarian style retailer.

During scanning, the participants were shown pictures of utilitarian and hedonic environments. We monitored activity in three regions in the brain. To understand how the brain responded in terms of value, we focused on activity in the orbitofrontal cortex (OFC). We label activity in this part of the brain as “anticipated value”. Activation in this region is related to buying impulse and motivation. In addition, we also looked at activity in the nucleus accumbens (NAcc), the brain’s primary “reward center”. Finally, we wanted to understand whether consumers experienced withdrawal or aversion in response to the pictures. Therefore, activity in the anterior insula (AI) was examined.

1. Brain activity in response to hedonic style retail increased compared with the discount approach mainly in regions associated with the perception of value and buying impulse (OFC). This result shows that it pays-off to invest in the shopper experience. The responses from the brain demonstrate that a hedonic style leads to increased reward processing in the brain. Predominantly in areas associated with increased desire and willingness to pay

2. Brain responses from the typical utilitarian shopper increased in the NAcc when pictures were shown of a utilitarian retail environment compared with the hedonic environment. This second result shows that impulse buying was actually increased in a subset of shoppers when they were presented with cardboard display boxes, cheap lighting and limited offers per category. We believe this effect occurs because a utilitarian environment signals “cheap” through associations. This result is intriguing; it suggests that - at least for a subset of shoppers - not investing in the shopper experience actually increases buying impulse.

3. Brain responses from the typical hedonic shopper showed an aversive response to pictures of utilitarian environments, as measured in the anterior insula. The last result demonstrates that for the shopper with a preference for hedonic retailers, the cardboard boxes, cheap lighting and limited offers, reduces perceived value and buying impulse. And. Additionally, it actually triggers an aversive response. 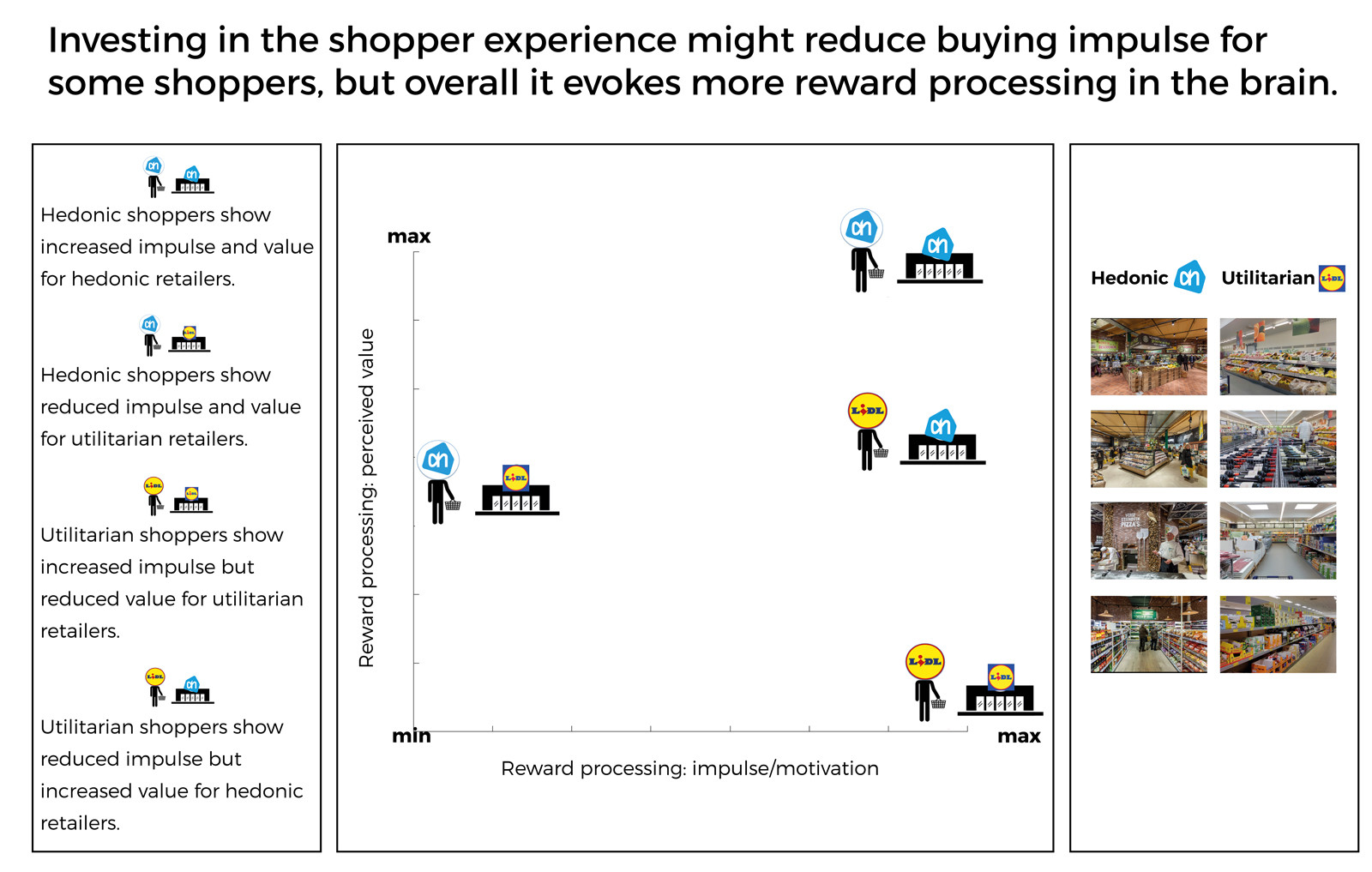 What’s intriguing about the study is that for certain shoppers, a hedonic style retail environment actually seems to reduce their buying impulse. This finding is somewhat counter-intuitive. Our interpretation is that shoppers who describe themselves as utilitarian have built associations over time. The associations they activate in response to viewing products in cardboard boxes and cheap lighting evoke a mindset that worries less about pricing. In contrast, the hedonic shopper experience itself could activate a mindset that includes worrying about prices and less impulsivity. Overall, the study results show that investing in the shopper experience does result in increased impulse and perceived value.