What happens in your brain when you watch a suspenseful movie? Does attention remain fixed over the course of a film, or does it fluctuate on a moment-by-moment basis, as the dynamic plot unfolds? According to our attention-narrowing hypothesis, moments of heightened suspense produce a spotlight effect. At these time points, the world of the narrative becomes the focus of mental processing and everything beyond the screen, such as noises in the room or concerns about daily life, is suppressed.

With this study, we wanted to measure what was happening in the brain during naturalistic suspenseful experiences. Another goal of our study was to test for the consequences of suspense when viewers have finished a narrative and are recalling what they watched. If attention is intently focused at peaks in suspense, will these moments be more accurately recalled in a post-viewing memory test? Finally, we were interested in how the mood of the accompanying music on the soundtrack would influence the experience of suspense. We tested if mood-congruent suspenseful music would amplify the effect of suspense and if mood-incongruent happy/calm would reduce the effect of suspense. 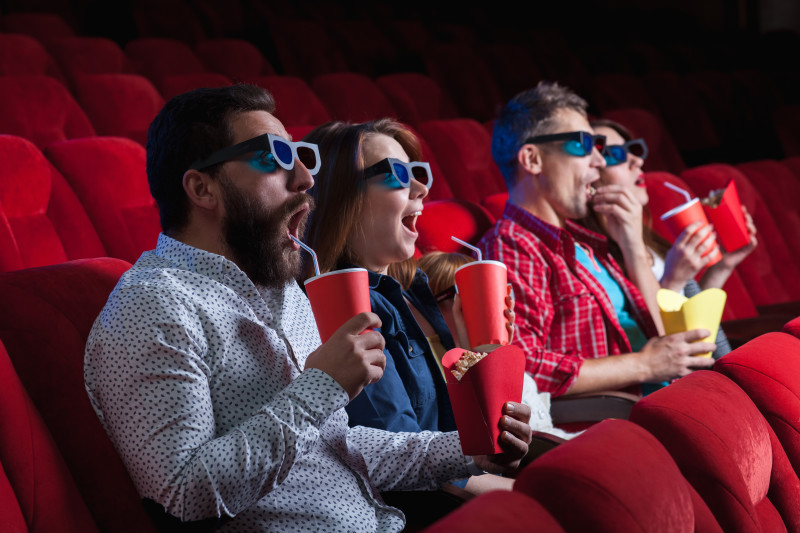 We used excerpts from successful films to evoke suspense with a stream of realistic sounds and images. In each of these excerpts, a character faced the threat of a negative (often deadly) outcome. The threat waxed and waned as the unfolding narrative events made the outcomes seem more or less likely. Functional magnetic resonance imaging afforded us the opportunity to study the brain’s response to suspense without requiring participants to make overt responses that might distort neural activity.

Participants viewed a set of nine suspenseful film excerpts while lying in an MRI scanner that captured repeated snapshots of brain activity. We also manipulated the music soundtrack for the excerpts, so that each participant viewed the film excerpts with one of three soundtrack types: no accompanying music (the original version of each excerpt), mood- congruent (suspenseful) music, or mood-incongruent (happy/calm) music. Following the scan session, participants completed a surprise memory test for what happened in the movie excerpts. Participants answered questions about what events occurred, with one question for each twenty seconds of film time. Another set of participants watched the same movie excerpts and moved a slider bar to provide continuous ratings of suspense. We averaged these slider ratings and used them to see which brain areas became more or less active as suspense increased.

If our attention-narrowing hypothesis was correct, we expected that suspense would produce momentary increases in attention-related brain regions. We also predicted that participants would show better memory for the events that occurred during high suspense moments compared to low suspense moments. Alternatively, if attention is constant over the course of suspenseful film scenes, we might not find differences in brain activity between peaks and valleys of suspense. 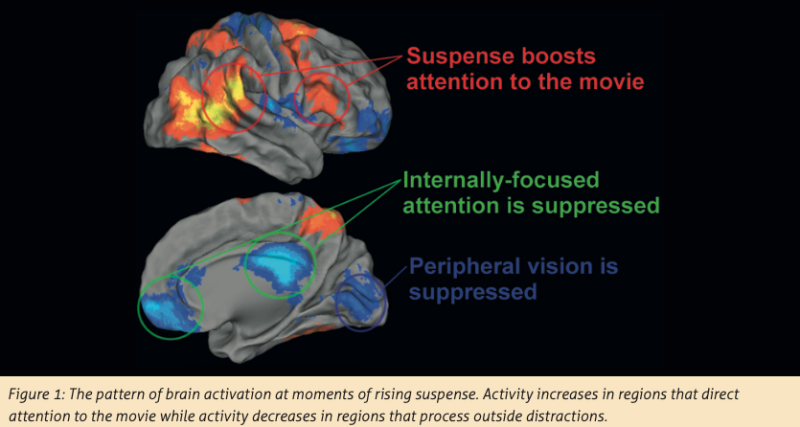 Suspense narrows the spotlight of attention. The pattern of brain activation evoked by rising suspense revealed evidence of attention narrowing. In early visual processing areas, regions that process what participants were looking directly at (the movie screen) became more active, while regions that process the periphery of vision (the environment of the MRI scanner beyond the movie screen) became less active. This suggests that suspense was tightening the focus of visual attention to the movie. Other brain networks associated with attention were also sensitive to suspense. The default-mode network is a set of brain regions that become more active when people engage in activities that are disconnected from what is currently going on around them, such as mind wandering and planning for the future. Default- mode network regions became less active as suspense increased. Conversely, regions in the ventral attention network increased with suspense. This set of brain regions comes online when attention is redirected. to engaging things that are occurring. Together these results suggest that suspense is boosting attention to the movie and suppressing attention to peripheral or internal distractions.

People are hardwired to care about other people. Witnessing a character in danger causes the brain to block out whatever else is occurring in the room and focus on the story. This momentary spotlight
of attention has consequences for what people will remember later. Moments of high suspense are better remembered than moments of low suspense. Adding suspenseful music may lead viewers to regard narratives as more suspenseful, although in our study, the pattern of brain activity elicited by suspense was similar across music types. Our findings suggest thatseeing characters face threats is a powerful tool to focus attention.

This article was originally published in the Neuromarketing Yearbook. Order your copy today!