What Eye-Tracking Can and Can’t Tell You About Attention

Eye-tracking has a natural appeal because it is so intuitive. We all know our eyes automatically follow what interests us, threatens us, or attracts us. Variations in eye movements, including speed of movement, duration of fixations, patterns and frequency of blinks, and patterns of visual searching behavior, are all relevant to how a person is responding to a visual stimulus like an ad, a video, a website, or a store shelf.

Eye-tracking solutions are delivered today in several forms. Dedicated hardware-software systems are used in labs to measure eye movements with great precision. Eye-tracking glasses use wireless connectivity to enable mobile eye-tracking in shopping and other “free range” environments. And webcam-based eye-tracking allows thousands of participants to be tested inexpensively, in the comfort of their homes, anywhere in the world, with almost immediate results.

Most dedicated eye-tracking systems use infrared (IR) light to find and trace eye movements and other important measures such as pupil size and distance for the stimulus source. This is true for both in-lab systems and mobile eyewear.

Webcam-based systems are different in that they can only access the visible light captured by the webcam. This creates a number of technical challenges, not the least of which is finding the participant’s eyes in the visual field of the camera and then calculating where those eyes are looking. The result is a trade-off of accuracy for convenience and cost.

Webcam-based eye-tracking is still less precise than dedicated IR systems, both temporally and spatially, but new developments in gaze recording technology like geometric analysis of corneal reflections are shrinking the performance gap between IR-based and IR-free eye-tracking. (Wedel, 2018).

Eye-tracking benefits from a rich array of well-established metrics, often built directly into software and automatically calculated in near real-time. These metrics allow researchers to develop a very detailed picture of consumer attention, as well as clues about other cognitive reactions, both conscious and unconscious, to marketing, product, and brand stimuli. (For an overview, see Genco et al., 2013). 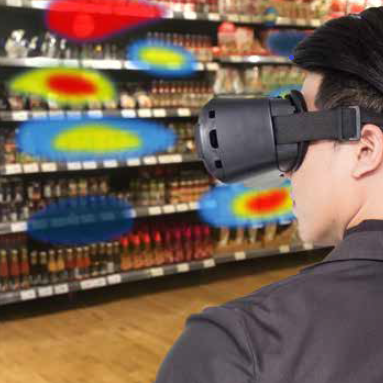 Where and when our eyes move from one area of a visual field to another is the core response measured by eye-tracking. Key variables are fixations, saccades, and gaze paths.

Saccades are rapid eye movements that occur between fixations. They represent periods of visual search during which specific information acquisition is not taking place. Direction and distance of saccades are indications of shifts in understanding, attention, or goals. Regressive saccades (moving back to a previously viewed area) often represent confusion or a lack of understanding. Long jumps indicate that attention has been drawn from a distance. Sudden shifts in saccade direction may represent a change in the viewer’s goals or an indication that the stimulus isn’t aligning with the viewer’s expectations.

Gaze paths represent the summation of fixations and saccades over time. Straight and rapid gaze paths indicate efficient and targeted visual navigation of the stimulus, while longer, more circuitous routes often signify confusion or a lack of direction in the viewing task.

Blinking is captured by eye-tracking and can be a good indicator of attention, because we blink less when paying attention and more when attention wanes. Two metrics, blink rate (the average number of blinks per minute) and blink duration (how long the blink takes), can therefore be useful indicators of attention allocation over a period of time.

Blink synchronization (the extent to which people blink at the same moment) across an audience of viewers can be used as a moment-to-moment measure of engagement with a video program or narrative. Because each viewer’s brain is independently deciding when to “take a break” with a blink, synchronization of blinking becomes an indicator of when the video is effectively commanding the audience’s attention, and whether it’s effectively communicating its intended narrative transitions (Nakano et al., 2009).

Pupillometry is the measurement of pupil size and changes in pupil size. Most eye-tracking systems measure pupil size as a byproduct of monitoring eye movement. Unlike goal-directed visual search, pupil dilation is not under voluntary control. Our pupils dilate in response to attention and interest, emotional arousal, and cognitive load, so pupil diameter changes can be a useful measure of selected cognitive and emotional reactions to stimuli in real time.

Pupil dilation occurs in the presence of both positive and negative emotionally-arousing stimuli, so it is not a good indicator of emotional direction (valence). Also, because pupil dilation is highly responsive to changes in external brightness, it is an unreliable measure for materials that change in brightness over time, like videos. It is most useful for studying static images, like print ads, whose brightness remains constant throughout the viewing experience.

Why eye-tracking is popular

Eye-tracking provides researchers with many benefits, often without requiring deep expertise to implement. Among its advantages are:

Eye-tracking does what it does simply and intuitively, but it also has some important limitations:

The meaning of a fixation cannot be determined from eye-tracking alone. When a person is browsing a web page, for example, fixations may represent greater interest in a particular area, or they may indicate that an area is complex and difficult to interpret. Longer fixations may indicate interest and goal-relevance, but they may also indicate uncertainty and processing difficulty. Shorter fixations, similarly, may to be associated with greater processing fluency, or they may be associated with lack of interest or boredom.

Combining eye-tracking with other measures

These issues can be addressed by combining eye-tracking with other methods. One popular combination is eye-tracking plus facial expression coding, which can be used to measure emotional valence in conjunction with fixations, gaze paths, and pupil response during exposure to marketing stimuli. Many software packages now combine eye-tracking and facial coding in a single system, enabling simultaneous capture and analysis of the two signal streams.

Eye-tracking can also be deployed alongside both biometric and neurometric measures, where it can augment the precision and accuracy of those measures, especially when researchers want to compare emotional and cognitive responses to different areas of a visual scene, such as a web page or print ad.

Biometrics include physiological responses like perspiration, respiration, and heart rate. They can combine with eye-tracking to provide evidence of emotional arousal as it relates to attentional focus. Neurometrics are derived from electroencephalography (EEG) or functional magnetic resonance imaging (fMRI). Although more complex to implement than biometrics or facial coding, they can combine with eye-tracking to delve more deeply into brain responses that accompany visual attention, such as approach-avoidance motivation, cognitive load, distraction, and stress (Ramsøy, 2015).

Given its intuitive metrics, its rapidly decreasing price point, its potential for fast turnaround times, and its incorporation into easy-to-use hardware/software packages, eye-tracking will continue to be the most accessible and widely used technique in the neuromarketing toolkit. It does have limitations, however, and is best used in combination with other methods, rather than as a standalone.

Steve Genco is a neuromarketing pioneer and lead author of Neuromarketing for Dummies (Wiley, 2013). He currently serves as Managing Partner at Intuitive Consumer Insights LLC.