For decades now, increasingly significant developments in technology have been building to a “paper-free” world where our media is created, marketed and absorbed 100% in the digital realm. This realm is leagues apart from the traditionally siloed world of print media, with the ever-connected consumer necessitating channels that connect not only to them but to each other.

We’ve now reached a point where many of the most significant channels (social media and influencers, for example) are those that didn’t even exist at the turn of the 21st century. This has had a serious knock-on effect when it comes to how advertising is consumed. It’s a battleground out there now and marketers are always looking for the most powerful and innovative new ways to claim consumer attention as it’s being scattered across multiple channels and contexts. Indeed, it’s the context that should be the real focus, because analyzing and measuring campaign effectiveness in isolation is simply not going to cut it today.

A lot of our decisions related to purchasing are made on a subconscious level. As a result, there are vast swathes of data that are going unchecked and unused because there was simply no way of gathering, analyzing, and measuring it. Neuroscientists, however, are aware of the innate power of the subconscious mind. At Neuro-Insight, we measure how memories are encoded into long-term memory, which correlates to action and decision making, as well as emotional response helping us understand both the content and, perhaps more importantly, the power that context i.e. the platform in which it is consumed, holds over a consumers’ response to that content. 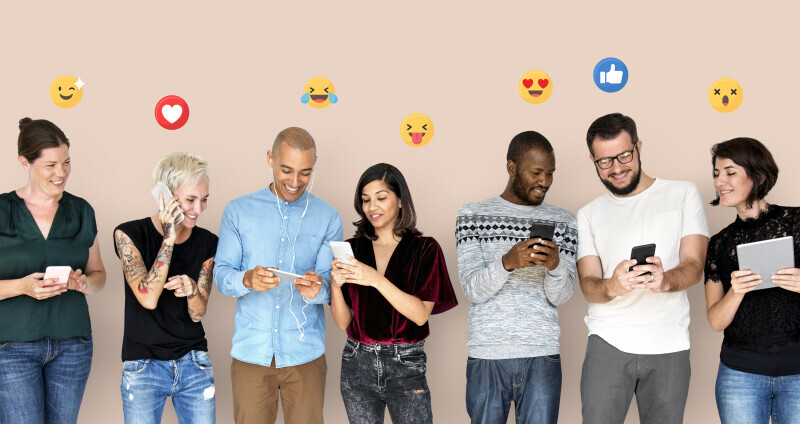 By giving a clear understanding of the context in which content is being consumed i.e. through platforms and channels in the real world, our neuromarketing platform can generate the most relevant and actionable insights. This is remarkably invaluable for advertisers and marketers wanting to plan and implement campaigns with impact. Context is something we all register on a subconscious level first and foremost. So, it stands to reason that neuroscience is the ideal tool when measuring how responses to content can change according to the platform it’s consumed on; the editorial context in which it’s featured; and the environmental context in which it’s consumed.

All about the platforms

A study we ran with Newsworks and the Association for Online Publishing (AOP) revealed that LTME (Long Term Memory Encoding) was higher in users of premium sites than users of social media. This is vital because LTME is proven to drive brand recall and future purchase decisions in consumers. The engagement was also 50% higher with the ad on premium sites than it was on general browsing, while emotional intensity was 25% higher. 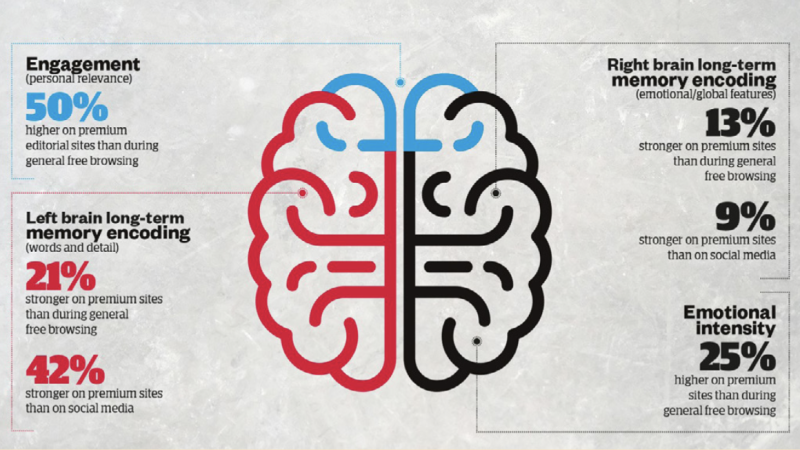 The engagement was also 50% higher with the ad on premium sites than it was on general browsing, while emotional intensity was 25% higher

This also proves that the “quality” of the platform has a significant bearing on emotional resonance, offering a greater chance of influencing consumer purchase decisions. This should prove beneficial to advertisers who favor more specialist outlets. It might also be one of the reasons why some online ads prove effective - it’s not that the ads are necessarily bad, it’s that they are being featured in the wrong places.

The impact of a changing environment

With 5G and WiFi 6 becoming a reality and changing the way people connect on the go, it’s not only the platforms that people are absorbing content on that are changing but the environments that frame these interactions. The environment can mean anything from location (the bus, the train, the office, or at home) to when a consumer experiences an ad. These factors will subconsciously change how they engage with the content. If they are hearing a radio ad campaign that directly relates to tasks or activities they are engaged in, they are bound to engage more with it than if it wasn’t relevant.

To put this theory to the test, we ran a study with Radiocentre, which analyzed how the context in which the advertising was consumed related to their engagement and memorability. Radio is often played in the background of our lives, so more information is being encoded into our memory implicitly than we are aware of. The research found that in a situationally relevant context, there were significantly higher levels of engagement and encoding. For example, when exercise was explicitly mentioned in a Currys ad for the Apple Watch, there was an immediate and sharp rise in memory encoding amongst those who heard the ad during an exercise bike task. The response fell among those who heard the same ad when engaged in an unrelated activity. 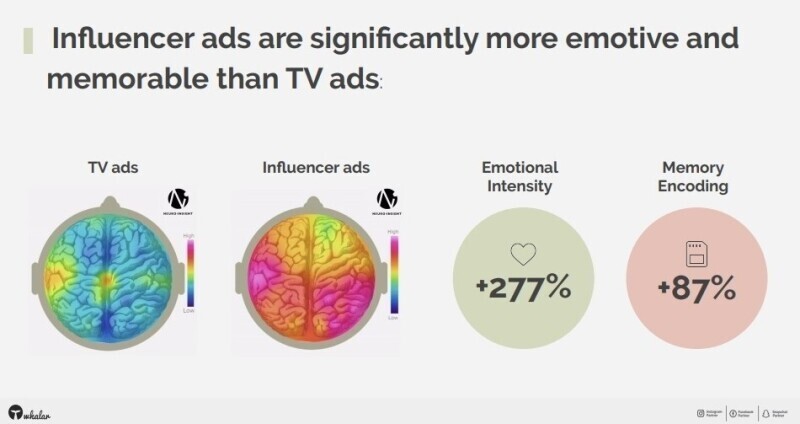 For example, when exercise was explicitly mentioned in a Currys ad for the Apple Watch, there was an immediate and sharp rise in memory encoding amongst those who heard the ad during an exercise bike task.

We also conducted a project with Ocean Outdoor to monitor memory encoding in digital out-of-home ads – yet another medium which we are not always aware is impacting us as we go about our daily lives. This study found that 36% of consumers who had been exposed to a DOOH ad were more likely to respond to a mobile ad that provided an “overlapping” context. This proves that advertisers should be not only take the environment into account but can experiment more with second-screen options and more in-depth contextual strategies.

And not forgetting editorial

Another Newswork study found that ads generally perform better in a “harder” editorial environment. Placing ads in hard news has increasingly become an area of interest and concern for advertisers, however, our platform demonstrated that the same ads stimulate very different responses depending on where they are placed. Premium editorial contexts, for example, (political news etc.) create stronger engagement, higher emotional intensity, and greater long-term memory encoding, which correlates with decision-making and purchasing behavior.

We measured the responses to identical ads in a premium editorial context and a “soft news” context (celebrity gossip etc.). The study showed that left brain memory encoding, which processes words and detail, is 42% stronger when people view ads on premium editorial sites than when they see the same ads within the context of soft news. This proves that hard-hitting, or news perceived as “negative” doesn’t necessarily have a negative impact on how our brains take that information in.

The increasing power of influencer marketing

One marketing channel that has taken off in recent years is the social media influencer. These online tastemakers are often matched with a product or service that reflects their own brand and, particularly for Millennials and Generation Z consumers, they are perceived as being that much more trustworthy than direct brand campaigns and even other more “traditional” celebrities. Indeed, one study found that six in 10 teens follow advice from influencers over celebrities.

This belief is reinforced by a study we conducted with influencer agency Whalar back in May 2019. We analyzed the reaction to various influencer ads from social media users aged between 18 and 65 and found that influencer ads generated 87% higher memory encoding than TV ads and an astonishing 277% greater emotional intensity. Influencer ads were also found to be more effective than both Facebook and YouTube ads. What’s even more interesting is that, when the influencer involved in the ad was a more traditional celebrity, there was a 54% negative response compared with their reactions to general content, though memory encoding was at 74%.

We analyzed the reaction to various influencer ads from social media users aged between 18 and 65 and found that influencer ads generated 87% higher memory encoding than TV ads and an astonishing 277% greater emotional intensity. Influencer ads were also found to be more effective than both Facebook and YouTube ads.

Of course, if you subscribe to the notion that “no press is bad press” then the negative reactions shouldn’t be such a major concern. However, the fact that the less famous “micro-influencers” generated the most positive emotional response (62%) might suggest marketers should be reaching a little further down the ladder if they want to build legitimate, positive relationships with their consumers.

Looking past the noise

Neuroscience has opened up a new world of opportunity when it comes to analyzing marketing effectiveness, particularly when it comes to the context in which content is consumed. Context was once seen as the great white whale of advertising, but now that the right tools are within the reach of forward-thinking marketers and brands, it’s no longer a hurdle to overcome; it’s a tool to be exploited.

The results of our findings have proven that in a culture of “everything all the time” it’s possible to look past the blather and peer right into the hearts (and minds) of consumers. Only by analyzing what they are thinking and feeling, and considering context (whatever the medium), will we be able to move forward as an industry. Then we might just be able to start creating the kind of campaigns that don’t just create customers, but lifelong fans.

References available on request via office@nmsba.com

About the author:
Shazia Ginai is CEO of neuro-marketing agency Neuro-Insight UK. She is responsible for managing the growth of the business and overseeing projects across a range of media and industries. Over the course of
her career, Shazia has held senior roles at ghd, working as their Global Head of Insights, and at P&G within its consumer research division. She’s a creative and curious marketing professional with a passion for people.

This was originally published in Insights Magazine, NMSBA members have access to the full archive of this quarterly magazine on neuromarketing. Interested in joining? Check the options