Taking a Stand: The Value of Neuroscience in Socially-Charged Advertising

Not anymore. More than ever, consumers are looking to purchase from brands that align with their own values, in both message and deed. 64% of consumers around the world are “belief-driven” buyers, suggesting that consumers are willing to pay for brands committed to social change or who take a stand on important issues.

But this type of messaging can be risky if brands don’t understand how their consumers will react, before making the leap. Over and over again we see brands misreading or misunderstanding this dynamic with very real consequences - from damaged brand perception, money wasted on a campaign that misses the mark or reduced sales. And as socially-charged advertising becomes more mainstream, staying silent on social and political issues can be just as risky. This is an area where we at Nielsen Consumer Neuroscience and our tools for evaluating and building more effective advertising are increasingly used to help our clients.

Nielsen found that obtaining insights around social and political messages, which are often sensitive in nature, requires a different approach than traditional testing. Integrating social and political causes with brand communications needs to be authentic, stand out, and be consistent with the brand’s values - yet it can’t reach too far or promise too much. More and more brands understand that this line is too fine to evaluate with only traditional research methods like surveys and focus groups, where social and confirmation biases can lead to incorrect conclusions. It requires the ability to understand consumer engagement on a nonconscious level to determine how potential audiences truly feel about the brand and the cause it has elected to support. Further, in order to uncover insights when it comes to sensitive topics, we need research methodologies that provide a high level of granularity to guide optimization and build stronger advertising. Neuroscience captures second-by-second, scene-by-scene diagnostics to identify what’s working and what’s not working, before going to market.

Methods used in these studies include a variety of tools, including EEG, eye-tracking, and facial action coding, combined with self-report techniques. By leveraging these technologies during the communication development process - from evaluation of early-stage campaign positioning to late-stage ad testing - we see how small changes can have a huge impact, and we gain a more holistic view of the consumer.

The following are examples of how two brands have navigated this tricky, but potentially valuable line with the help of neuroscience insights. One describes a brand taking a stand on a social issue, while the other demonstrates a unique way that a social cause is reaching consumers.

Heineken Tecate - Aiming for a Mexico without Violence Against Women

Since 1944, Heineken Tecate has grown market share in Mexico with branding that features traditional stereotypes of masculinity – focused on strong, brave, bold men who drink Tecate. This is contrasted against a society fraught with sexual assault, where two in three women suffer from some form of gender violence, and seven in ten women believe this is normal.

Tecate decided to take a stand. The brand developed a campaign with a 60-second TV spot as a centerpiece that features a narrator challenging traditional masculine attributes: “A man is not defined by his strength. A man is defined by how he treats a woman. If you’re not a man, you don’t deserve Tecate.” The ad features a scene in which a couple is enjoying dinner together. When the male character suddenly turns angry and appears to frighten the woman, viewers hear the tagline “If you don’t respect her, Tecate is not for you” - and a bottle of Tecate explodes on the screen. The final moments of the ad share the statistic - “Two in three women in Mexico suffer from some type of gender violence” – and ends with the Tecate logo and campaign slogan: “Tecate, for a country without gender violence.”

A radical evolution of a brand’s positioning and taking a stance on a sensitive social ssue, are risks that marketers are often hesitant to tackle: especially if the target consumers traditionally are resistant to this message. By using neuroscience to study the ad, Tecate avoided the biases inherent in traditional self-report research to understand just how its consumers would react. The research showed that male Tecate drinkers were, in fact, engaging with its bold message, the scenes of gender violence were highly memorable and the Tecate brand was positively lifted and associated with credibility. Armed with an understanding of its consumers’ nonconscious responses, Tecate was confident that launching the ad in the market would be impactful, yet not turn away its key consumer base.

The in-market success of the campaign surpassed Heineken Tecate’s expectations. The campaign received more than 80 million media impressions, won multiple prestigious awards, and drove conversations in more than 65 countries. But, most meaningfully, the Red Nacional De Refugios, which works to promote gender equality and end the cycle of violence, reported a 75% increase in people asking for help with domestic violence through email and phone calls.

Challenging stereotypes, as we just demonstrated, is a major undertaking - one that has potential benefits but also one that requires preparation and close attention to detail. And when we say detail, we mean even subtle elements that aren’t necessarily integral to a storyline. The Ad Council experienced this recently with a well-intentioned adoption public service announcement that may have gone awry were it not for integrating nonconscious and conscious research methodologies.

In the humorous “Break Up” ad from AdoptUSKids, a nonprofit that connects children in foster care with families, a teenage foster daughter experiences her first breakup. Deeply upset, her bewildered foster father is shown deciding between several options to comfort her: putting himself in her shoes, consoling her, or finding her a new boyfriend. During the spot’s closing scene, viewers hear: “As a parent, there are no perfect answers, but you don’t have to be perfect to be a perfect parent.” We see the foster father and foster daughter sitting side by side, with the foster father’s hand on his daughter’s knee.

It’s the type of scene created to leverage positive social interaction to deliver an emotional connection. Except, in this case, EEG emotional motivation dropped significantly, accompanied by negative facial coding. Eye-tracking showed that viewers focused heavily on the foster father’s hand on his teenage daughter’s knee - at the expense of the overall message. And when participants were asked “What, if anything, did you dislike about the ad?” responses revealed that some found the scene inappropriate. 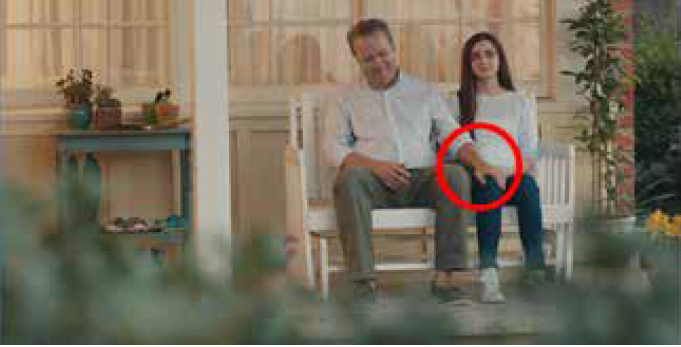 This detail may have been subtle without the combined insights that neuroscience can provide. It could have been powerful - but in all the wrong ways. We know that context matters, characters matter, and not all creative moments are created equal. After pinpointing a problematic moment, the campaign was released and continues to succeed - as nearly 40,000 families have registered with AdoptUSKids and more than 26,000 children have been adopted since 2004.

Taking a stance on social and political issues isn’t just for nonprofits anymore. As consumers continue to vocalize the importance of having the brands they buy take a stand for specific social causes, many brands are now faced with the challenge of taking more risks. Brands have the ability to play a powerful role in the world of social change – the challenge is to ensure it is done as effectively as possible. The power of neuroscience can help marketers capture conscious and nonconscious consumer responses in order to help marketers reduce risk, avoid wasted (or damaging) investment in advertising and advance their brand in a world where the line between consumer and citizen is blurring. With the right tools, it is possible to take risks without being risky.

Previous article:
Next generation of neuromarketers need YOUR help!
Next article:
Smart Eye Extends Use of Affectiva Emotion AI for Qualitative Research with Conversational Engagement and Valence Metrics
Close