Why is there so much apathy towards recycling in the workplace and how can we drive behavior change towards recycling? To answer these questions, we teamed up with Ceris Burns International who are specialists in Environmental PR.

The British recycle 43% of their household waste, a massive improvement on the average of 11% 14 years ago. This is still below the 50% EU target for 2020 and this rise in recycling has been slowing down in the past few years. Workplace recycling is even lower. We found that 22% of workplaces are not even providing recycling facilities. A whopping 52% are confused about what they can and can’t recycle.

Communications have a greater impact if they are emotive since emotions power decision making, but how exactly should these messages be presented in order to effectively change attitudes and behavior? We decided to find out whether threatening, negative messages or positive, hopeful messages about recycling had a greater impact on changing peoples’ attitudes about how important recycling is.

There is some reason to predict that negatively framed messages may have more of an impact on peoples’ attitudes. We automatically attend to threats in our environment as a survival mechanism, and we tend to give more weight to potential losses than potential gains. The impact of framing also depends on the situation and target audience. Negative messaging tends to be more effective when the outcome is risky or uncertain, and when the audience feels strongly involved in the issue. Under certain circumstances, positive messages can influence people more strongly than negative messages by reinforcing positive associations with the attitudes and behavior. We have found this to be the case in previous research we have conducted. 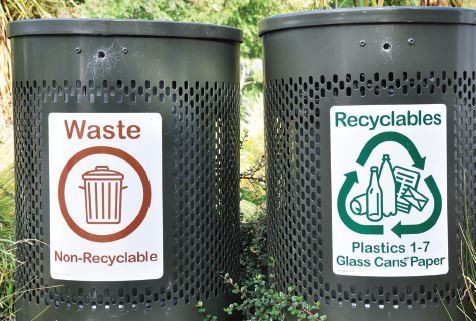 We used an implicit association test (IAT) to measure implicit, subconscious attitudes towards the importance of recycling. Because recycling is a socially desirable behavior, simply asking people about their intentions to recycle may not be an accurate prediction of future behavior. Measuring subconscious associations bypasses people’s tendency to answer with what they think they are expected to say, allowing us to more accurately measure whether the communications have had an impact on attitudes towards recycling.

We questioned 200 UK adults about their current recycling behavior and attitudes towards recycling; then viewed either positive or negative messages about recycling; followed by an implicit (IAT) test measuring how strongly they associate recycling with importance; and finally they answered questions regarding their intentions to recycle in the future.

Importantly, this effect was significantly enhanced for people who thought recycling was less important, less effective and who reported less frequent recycling behavior, suggesting that positive messaging should specifically target this group in order to change their attitudes and hopefully their future recycling behavior.

In contrast to the implicit findings, the positive and negative messages did not lead to differences in self-reported intentions to recycle in the future, demonstrating the importance of the implicit measure in this study.

In summary, if you want your employees or colleagues to recycle more, highlight the benefits of recycling rather than trying to make them feel bad about not recycling. To avoid confusion over what can and can’t be recycled, ensure clearly labeled facilities are present where people generate waste. Make sustainability part of the company ethos and lead by example.