How Can We Be Sure an Ad Concept is Going to Sell?

This article is about the ingredients of successful TV commercials. Is there a ”neural signature“ of effective ads be predicted by a storyboard.

Makro wanted certainty in predicting consumer behavior and opted for an fMRI-study. To answer the first question Neurensics developed a design in which BOLD-MRI responses were measured (GE-EPI, 3T Philips Ingenia) of subjects (n = 22) who watched the Makro storyboard and four re-engineered benchmark storyboards (see below). 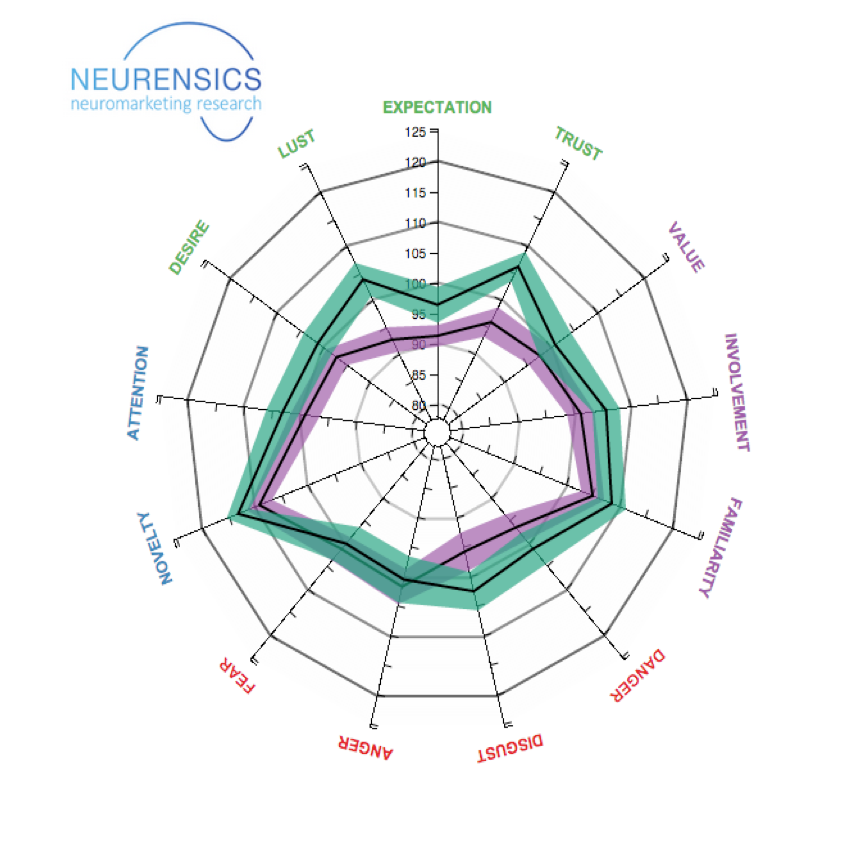 Scores of the Makro storyboard (purple) and produced TVC (green)

BOLD-MRI responses are relative, just like many other measurement tools such as questionnaires and EEG. The power of the results is much improved by using benchmark stimuli. As this was the first time Neurensics worked on predicting the effectiveness of a storyboard in Argentina they had no readily available benchmark material. However, from previous studies in which they tested Argentine TVCs they selected two effective commercials (measured upfront and acknowledged afterwards as Effi e-winners) and two non-effective commercials. In order to compare apples with apples these TVCs were reengineered into moving storyboards.

The 22 subjects were measured in one weekend and the results were presented on the Wednesday after the fi nal measurements. On the basis of these results and an expert opinion, the advice was generated on how the commercial could be improved. Next Makro produced the TVC. In a second experiment new subjects (n=22) were measured while presenting them the produced TVC together with the four TVCs on which the benchmark storyboard was generated. Using these measurements the effectiveness of the produced commercial and the quality of our previously given advice were topic of research.

In the first experiment, we found that the Makro storyboard scored below average in terms of effectiveness: it activated more negative than positive emotions. In particular, the storyboard did not activate decent levels of trust and expectation. The overall result was a negative score on influencing buying behavior.

In addition, it was interesting to see that the benchmark storyboards of previously tested TVCs came out almost identically as had been seen in previous studies. This confirms that fMRI pre-testing of storyboards can be used to predict the effectiveness of the to-be-produced TVC.

We identified specific scenes in the storyboard that provoked fear (eg, bloody meat, a forklift with a pallet and someone just walking under it), anger, and rejection. Furthermore, we believed that the low levels of trust, expectation and desire were caused by not mentioning Makro’s end value. Finally, we identified some story plots that were not resolved in the storyboard and advised adding music with a climax.

Based on these conclusions, the ad agency changed the script and implemented our advice. The produced TVC showed a dramatic and significant increase in positive emotions as well as a decrease in negative emotions. The benchmark TVCs again scored in a similar way as their storyboard versions, indicating that the improvement was a result of the changes in the script and not a production difference between storyboards and TVCs. The results therefore show that the TVC improved in quality based on the previously given advice, generated on the basis of the storyboard measurements.

At the time of writing Makro has confirmed an increase in their sales of 12% in units/ volume compared with the same period last year in a country that has been in recession for several years.

On the whole, this research shows that it is possible to test the effectiveness of TVCs based on their storyboards. Since producing storyboards is much cheaper than producing a TVC, it makes sense to test one or several storyboards and consequently improve the storyboards based on the feedback. In this specific case, the pre-test led to an improvement of Makro’s TV campaign. The effectiveness of this technique has been demonstrated by a 12% increase in sales compared with the same period last year.

We believe it is essential to use BOLD-MRI for pretests, as BOLD-MRI makes it possible to distinguish between the many brain networks that are important to evaluate the effectivity of ads. Limbic brain structures particularly, like the nucleus accumbens, are hard to measure with techniques such as EEG.

Revolutionizing the way TVCs are produced

The research project of the Makro storyboard was performed in five days, from the first measurement to the delivery of data. Depending on the continent, Neurensics is now capable of shortening this cycle to three to four days. This makes it viable to perform pre-testing of storyboards on a routine basis for ad-agencies. In this way, it will become possible to improve the effectiveness of TVCs in a very cost-efficient manner. Neurensics believes this has the potential to revolutionize the way TVCs are produced.